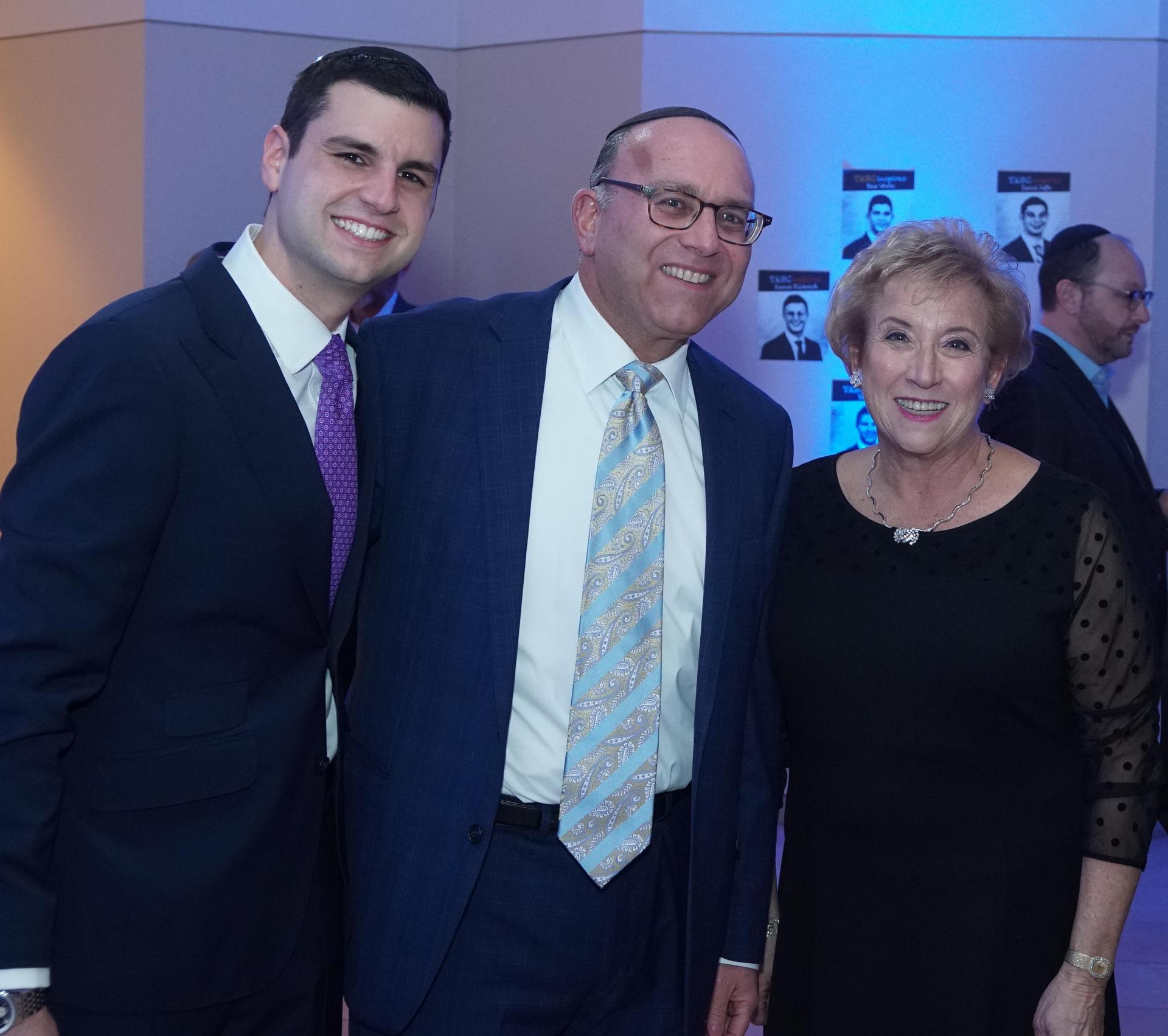 Welcome! To go straight to the donation page, click here.
Thank you to the 575+ guests who joined us for the
TABC Annual Dinner.
Thank you to the hundreds of donors who helped us
raise $920,000 (and counting!) for the
Bruce Ritholtz z"l Scholarship Fund.
The evening, which included meaningful and inspiring tributes to our honorees, was an
opportunity to share our collective pride in our yeshiva and experience the warmth and
energy that makes TABC so special.
There is still time to help us reach $1,000,000!
Donations can be made to the Scholarship Fund by clicking here.
Please enjoy the TABC music video, Dinner photo album and honoree tribute videos below.
To view the Light the Fire music video, click here
To view the Mo Fuchs Honoree video, click here
To view the Linda Moed Cohen Honoree video, click here
To view the Tzvi Solomon '09 Honoree video, click here
To view the photo album click here.
Mo Fuchs is synonymous with yeshiva floor hockey.  He has been the Varsity Coach and Director of Hockey Operations at TABC since 1994 and is the architect of TABC's renowned and unique floor hockey program. Mo has inspired a culture of sportsmanship, athleticism and school spirit that makes his TABC hockey program truly unique and special.  He has served as a role model, instilling in his players the values of teamwork and leadership. The ever popular annual team shabbatonim and barbeques encourage life-long bonds among the players as well as the parents. Under his direction, the JV and Varsity teams have won a collective 14 championships.

Mo’s reach goes beyond our high school students.  His TABC Junior Hockey League is an enormously popular program in which local middle school students play hockey in a Torah environment, coached by TABC players. Expanding his reach beyond Bergen County, Mo has also been a fixture in the hockey programs at camps Mesorah, Morasha and Dovid for many years.


When he's not coaching, Mo is the Vice President of Sales for Morre-Tec Industries, Inc., a manufacturer and reseller of nutritional, cosmetic, and pharmaceutical ingredients for various companies. He has served on the boards of Congregation Rinat Yisrael, The Moriah School, and Ma'ayanot. Mo and his wife Rina live in Teaneck and are the proud parents of four daughters (all of whom would have attended TABC!) We are thrilled to be recognizing Mo's contributions to TABC and the larger Jewish community and wish him much continued success, on and off the court.

Linda Moed Cohen has been the school nurse at TABC for the past 16 years. During that time, while certainly ensuring TABC met all state and immunization requirements, Nurse Linda has implemented several important programs, including emergency response training for teachers and coaches, the bi-annual blood drive, and the bone marrow registry drive. She has also brought in many speakers throughout the years to address students on topics such as substance abuse, healthy eating habits, and skin cancer. Linda’s office is always open to students who want to talk and she has been the sounding board and confidant for countless students throughout her years at TABC, working closely with guidance counselors, teachers, and administrators to ensure wellness. Linda also initiated the faculty lunch-and-learn series with Rabbi Fridman, which meets weekly.


Linda’s communal involvement extends beyond TABC. Her passion for Jewish activism developed while growing up on the Upper West Side of Manhattan and attending the Jewish Center. While studying in Israel, where she was fortunate to learn under Nechama Leibowitz z”l, she volunteered at Shaare Zedek Medical Center in Jerusalem. She has been very involved in Bikur Cholim of Highland Park and Raritan Valley, as well as organizations dedicated to Israel advocacy. In 2000, she was the nurse on March of the Living.


Linda and her husband Dr. Hillel Cohen live in Highland Park and are the proud parents of Leora & Sam Schiff (and grandparents to Shamir Schiff), Aryeh (TABC Class of 2008), and Ariella. We are thrilled to be recognizing Linda’s unwavering dedication and commitment to the students and wider TABC community.

Tzvi Solomon is a graduate of TABC’s Class of 2009.  As a student at TABC, Tzvi played on the JV and Varsity basketball teams, founded the Tzedakah Committee with Rabbi Jachter, and participated as a student representative at the annual Open House for Prospective Students. Most notably perhaps, Tzvi is the mastermind of Pink Day Around the World, which expanded TABC's Pink Day to schools and universities around the world. Ever since then, thousands of students have taken part in this meaningful day to benefit Sharsheret. In addition to serving on the TABC alumni committee, Tzvi’s current communal involvement includes serving on the executive committee of SINAI Schools and as a board member of American Friends of Migdal Ohr. In 2017, Tzvi received the Lev Tov Young Leadership Award from American Friends of Migdal Ohr. Tzvi is a graduate of Yeshivat Lev HaTorah and Yeshiva University's Sy Syms School of Business, where he was recognized with the Professor Richard Williams Memorial Award for Service and Character. He is currently a Vice President at Goldman Sachs in the CIMD division. Tzvi comes from a family dedicated to TABC's growth and success - joining his parents (Yosepha and Yitzie), as well as his aunt and uncle (Bracha and Mark Bluman) and cousin (Etan Bluman) in an esteemed circle of past Dinner honorees. Tzvi and his wife Erica live with their son Matthew in New Milford, NJ.  We look forward to Tzvi’s continued generosity of time and leadership to TABC.