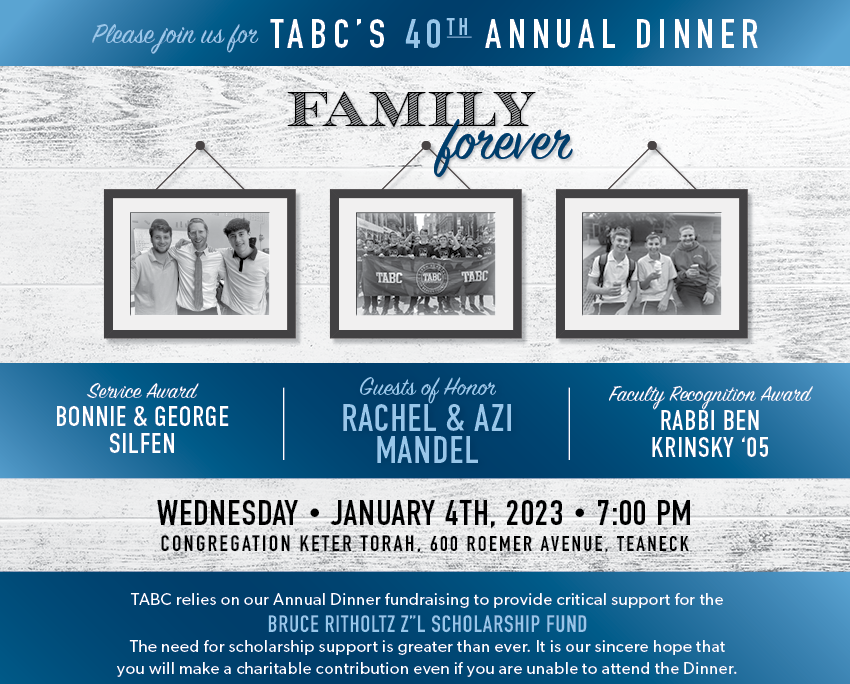 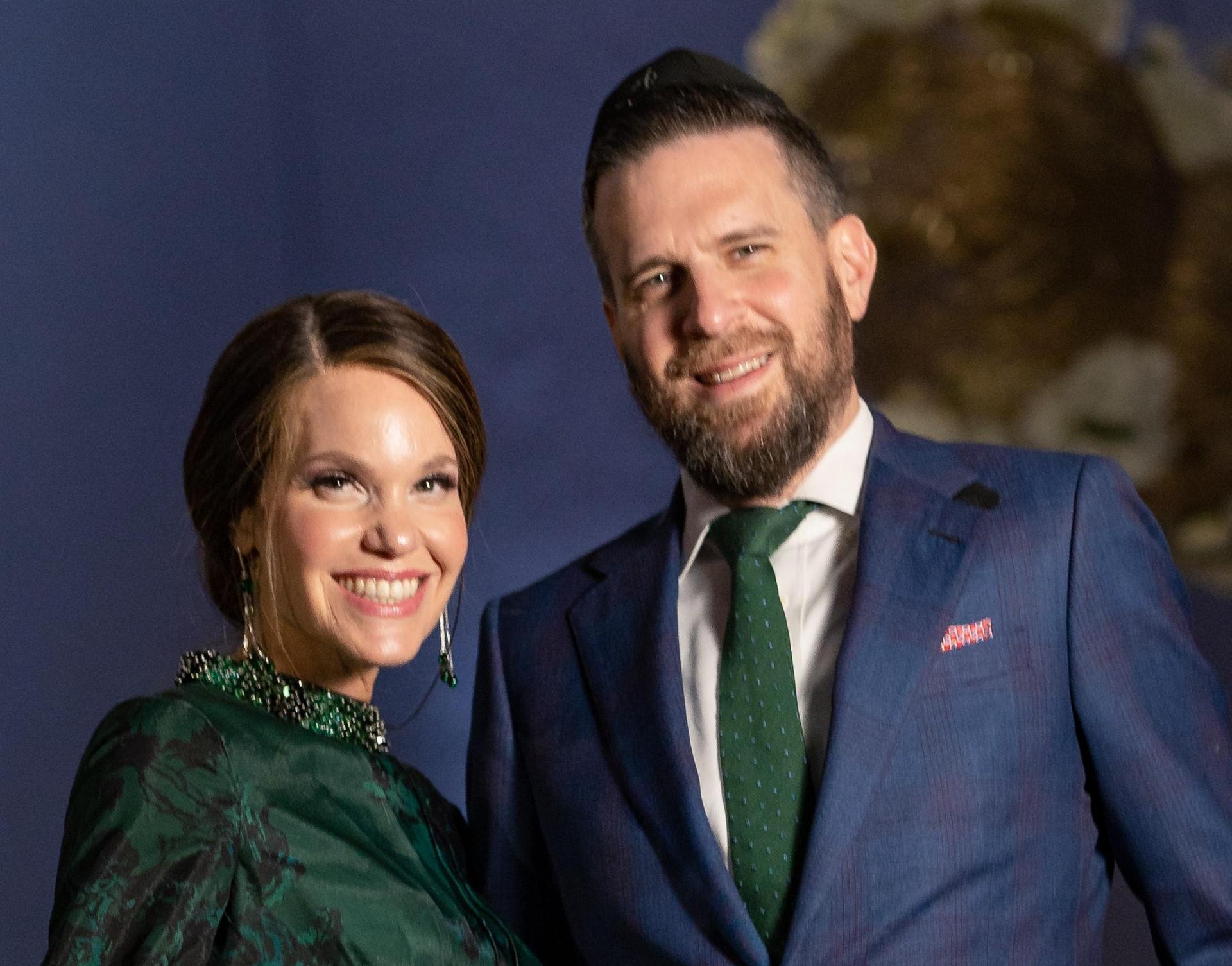 TABC is thrilled to be paying tribute to Guests of Honor Rachel and Azi Mandel. Rachel and Azi are role models of commitment to Jewish education, to our communal institutions, and to the future of Klal Yisrael.  Together, this dedicated couple has selflessly served our yeshiva with passion, determination, and generosity through exciting growth and unprecedented times, always with an eye to making TABC the best it can be for our sons. Azi served as our President for three years, harnessing his business acumen, drive for excellence, team management style, and forward-thinking approaches for the benefit of our talmidim.  His strong leadership and expertise in areas of the school’s structural organization, financial resource development, budgeting, and facilities have made an incredible impact on TABC that will be felt for years to come.  No job is too big or small for Azi - he just gets it done.

Rachel has been by Azi’s side throughout his time as president of TABC - no small task, and vitally important to the success of his presidency. She is always available to help in any capacity, opening the Mandel home for programs and events, giving sound advice, and serving as a proud and insightful TABC ambassador. She is very involved in many community organizations as well, having served on the RYNJ PTA Board for 16 years, as a Chesed 24/7 volunteer, an iShine volunteer, and as a shadchan through YU Connects.

Azi has also served in many leadership roles in the greater Jewish community: He is a past president of RYNJ where he had a tremendous impact in areas relating to the school’s development, facilities, and quality of education. Additionally, Azi has served on the executive board of SINAI Schools and helped foster RYNJ’s partnership with SINAI. He also currently serves as a national vice president of the Orthodox Union. Professionally, Azi is Managing Member of Treetop Companies.

The Mandels exemplify commitment to volunteerism and communal responsibility and TABC is privileged to benefit from their unparalleled dedication to our yeshiva. Azi and Rachel are proud parents of Coby ‘21, Arielle, Kayla, and A.J. ‘27.

Bonnie and George Silfen are well-known in the community for their deep involvement in so many diverse organizations and causes. A school psychologist by profession, Bonnie has devoted the past two decades to her volunteer work, from serving in nearly every parent role at Yavneh Academy, including YPAA president and long-time board member, Sisterhood president of the Young Israel of Teaneck for 10 years, Ma’ayanot Board member, work with JFCS, Emunah, the Teaneck Mikveh, Yeshiva University Women’s Organization, and, of course, TABC. She has served on the TABC Board for the past 11 years, dedicating her time and energy to so many initiatives, including co-chairing the TABC Dinner for many years (including this year’s), hosting parlor meetings, organizing meet and greets and sports dinners, running TAPA programs, launching the TABC apparel store, chairing the Scholarship Breakfast, and more. George is Bonnie’s partner in every way, and together they are generous supporters and incredible ambassadors for TABC.
For the past 26 years, Bonnie and George have been co-presidents of a non-profit yeshiva scholarship fund that provides tuition scholarships for public school students who transfer to yeshiva day school. George’s well-regarded and popular weekly shiurim take place in multiple community shuls and in the beit midrash in their home. He has served as a Partners in Torah mentor and teacher for over 28 years, making a profound and lasting impact on multiple chavrutas over that time. He is a member of the Advisory Council at Congregation Keter Torah and previously served on the board and as gabbai of Young Israel of Teaneck for 15 years. George, a lawyer by profession, received semicha and recently published the Hebrew sefer Vayeverach Shlomo on parsha and Moadim. He is currently a registered funds partner at Kramer Levin Naftalis & Frankel LLP.
Bonnie and George are the proud parents of Yosef ‘15, Elana & Zach, Ahava, and Ezra ‘23. The Silfens truly exemplify service, both to TABC and to the wider community, and we are proud to honor them with this year’s TABC Service Award.

Rabbi Ben Krinsky '05, Faculty Recognition Award
TABC faculty honoree and alumnus, Rabbi Ben Krinsky ‘05, is in the third stage of his TABC life. During his first stage as a TABC student, Rabbi Krinsky was captain of the College Bowl team and a member of the chess and Science Olympiad teams, holding leadership positions on both and earning medals for the school. Most significantly, it was during his years at TABC that Rabbi Krinsky internalized the messages his rebbeim and teachers taught him about the importance of being both learned in Torah and general knowledge. After graduating in 2005, he studied for two years at Yeshivat Sha’alvim. When he returned, he attended Yeshiva University, majoring in mathematics and computer science. While in college he moved into the second stage of his TABC life, returning to give chaburot at TABC on Fridays. After college, Rabbi Krinsky stayed at YU to complete his master's in education as well as semicha.
In this latest stage of his TABC life, Rabbi Krinsky teaches both math and Tanach and exemplifies the importance of Torah u’Maddah to our students. He is an enormously popular teacher who is serious in the classroom but knows how to relate to our students and have fun outside of it. Rabbi Krinsky founded and advises the Sports Club and can be found cheering on our students at games and competitions, going on trips, joining shabbatonim, dancing at chagigot, and being an overall positive presence in the school. He is the definition of “all-in.” In fact, this year, Rabbi Krinsky took a very early flight after his brother’s Shabbos Sheva Brachos in Georgia to ensure he could be at the Open House and offer his always-popular “Trigonometry and the Houston Astros” mini-lesson to the parents.
TABC is extremely proud to honor our alumnus, Rabbi Ben Krinsky ‘05, with the Faculty Recognition Award.